The Solitude We Are 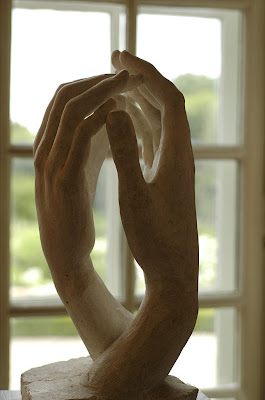 Cathedral, by Auguste Rodin
To speak again of solitude, it becomes ever clearer that in truth there is nothing we can choose or avoid. We are solitary. We can delude ourselves and act as if this were not so. That is all we can do. How much better to realize from the start that that is what we are, and to proceed from there. It can, of course, make us dizzy, for everything our eyes rest upon will be taken from us, no longer is anything near, and what is far is endlessly far.

Note about Rodin's hand sculpture, "Cathedral," found here:
Rodin was a highly original sculptural genius but he openly acknowledged his indebtedness to the artists who had preceded him; the masters of ancient Greece and The Renaissance; Phidias, Donatello, Michelangelo. He was also intensely interested in Gothic art, the cathedrals of France. After viewing and studying the Magnificent cathedral at Amiens he felt that the basic inspiration came from the voices of nature, from the trees with their strong limbs reaching upward. In the two right hands with fingers arching together he probably thought that he had discovered the source and inspiration for the gothic arch, that arch which with repetition and expansion led to the creation of the superb gothic cathedrals. The hands are obviously those of separate individuals. A spiritual communication between the two is expressed but the fingers and hands remain slightly separated. Could he, through that separation, have been expressing the aloneness of all human beings, the desire for a complete unification which is never realized?

Email ThisBlogThis!Share to TwitterShare to FacebookShare to Pinterest
Labels: Rodin

"Everything is blooming most recklessly; if it were voices instead of colors, there would be an unbelievable shrieking into the heart of the night." 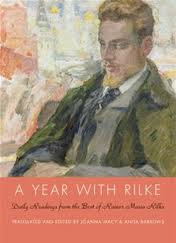 
The Posts by Artist Pairing

has thoroughly and generously explored the "problems" of translation in an article linked here, in which he explores the poem Herbsttag by Rilke. You can read fourteen versions of the first stanza by different translators, as well as a revelation of the issues of translation: word choice when there is no perfect equivalent; diction; word order (maintain the original or rearrange for effect?); rhyme; balance; and looking at the context of the poet's previous work.